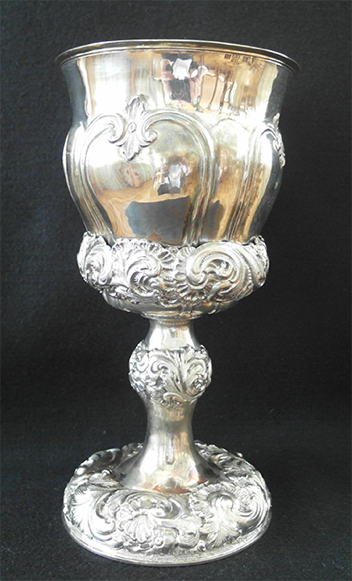 The second largest collection of Vadim Y. is Russian and European artistic and household silver. It has about 1300 subjects. Tea and coffee sets, saltcellars, teapots, rusk dishes, vases, crystal decanters in a silver frame, each of which has undoubted historical and artistic value. The items that were included in the collection had been created over a long period. Single items date back to the second half of the 18th century; most of them were created during the 19th and 20th centuries, right up to our days. Ordinary masters of Moscow and St. Petersburg, as well as world famous firms and artels of large Russian cities made them. In the collection there are several things made in Kostroma and Yaroslavl. In addition, it contains a small part of the items originating from Western Europe - Germany, Englandand France.

A variety of forms and decors, different techniques for the execution of the products represented, make it possible to trace the main features of the development of silver business in Russia for almost one and a half centuries. The collection also provides an opportunity to assess visually the formation of the household environment of both the most well-off people and the "middle class". By stamps, we can determine the place and time, and sometimes the name and surname of the master, from whose hands this product came out. Also not without interest is the “targeting”of many things. Some items are decorated not only with monograms and coats of arms of their owners, but also with inscriptions that address us to specific people and historical events. Decorative pads on "masculine" items, such as cigarette cases, matchboxes, writing utensils, reveal the occupation and the circle of hobbies of those whom they belonged.

In a separate group, it is possible to combine works whose authors sought to embodyin silver the traditions of Russian folk arts and crafts. Here you can seeboth the use of textures that imitate different types of weaving, and appeal to the OldRussian dishware forms –large pitches or loving cups, flagons, traditional drinking vessels or ladles shaped like a duck and others. Under the influence of Russian style, masters also created objects with epic characters and plots.

Noteworthy are highly artistic household items made in various techniques of polychrome enamel. All of them – from the women’s thimble to the cups and vases – demonstrate virtuosic skill and are filled with joy and harmony.

Collecting all that silverware Vadim Y.Orlov was guided primarily by the desire to present the entire spectrum of the existence of the precious material in the household environment, which silver gave a touch of gentleness and sophistication.