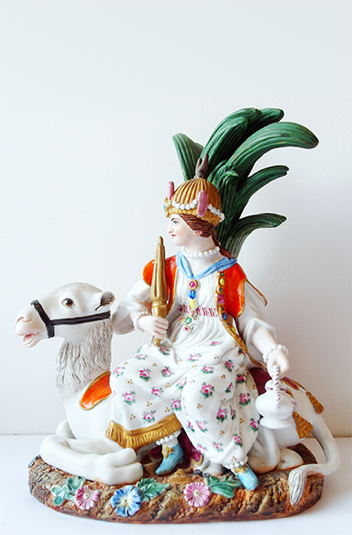 Art porcelain is the largest and most significant section of the collection. The focus of the collector was always concentrated on products of Russian private factories.As a result, the products of the Gardner factory, reflecting all the periods of its existence, an impressive selection of the so-called "earthenware" factory of M.S. Kuznetsov in Tver, refined plastic plants ofPopov and Miklashevsky were included in the collection. Along with plastic (namely, it was the main subject of collecting, dishware is represented by a relatively small number of items) of the largest porcelain manufacturers,the collection also represents numerous small porcelain and faience factories. Many of them existed no more than one or two decades, passing from hand to handrepeatedly. All this together represents a vivid andcomplete picture of the development of porcelain and earthenware production in Russia.

Inside this section, there are also collections, which were the subject of special interest. These include the series "Peoples of Russia" collected over many years, produced by the Gardner factory at the end of the 1870s and 1880s, by illustrations to F.Pauli's book “Ethnographic Description of the Peoples of Russia” (1862). It should be noted that M.S. Kuznetsov continued the release these figures after he had bought the Gardner’s factory. They kept on producing castings on old forms in the 1920s and 1930s.

Plastic and utensils of the first decades of the 20th century are of particular interest. The so-called “agitating porcelain” is presented in the widest range: from the works of N. Danko to the miraculously preserved "public dishes" with slogans like "Public catering under the fire of working self-criticism" or "Public catering is the way to a new life."

The works of the outstanding porcelain masters of the Leningrad porcelain factory, as well as the factories from the places of Verbilki and Dulyovo (Moscow region) represent the middle and second half of the 20th century.